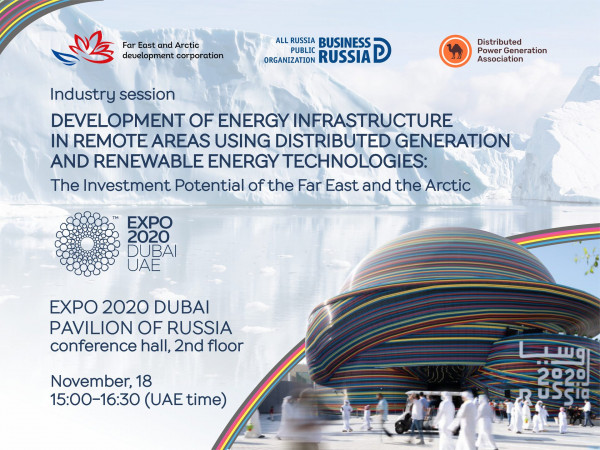 Development of Energy Infrastructure in Remote Areas Using Distributed Generation and Renewable Energy Technologies will be discussed at the industry session of DPGA, FEADC and Business Russia at EXPO 2020 Dubai

On November 18, 2021, 15:00 - 16:30 (UAE time), within the framework of the business program of the EXPO 2020 Dubai World Exhibition, a panel session on Development of Energy Infrastructure in Remote Areas Using Distributed Generation and Renewable Energy Technologies: The Investment Potential of the Far East and the Arctic will be held in the conference hall of the National Pavilion of Russia. The event will be organized by the Far East and Arctic Development Corporation (FEADC), the Ministry for Development of the Russian Far East and Arctic, the Distributed Power Generation Association (DPGA) and the All-Russia public organization Business Russia.

The purpose of organizing a profile session at EXPO 2020 is to draw attention to the topic of energy development of the Far East and the Arctic using world technologies of distributed generation and renewable energy, presentation of the investment potential of this macro-region, as well as the application of best practices of foreign countries to address issues of energy supply to remote territories.

Today the Far East and the Arctic area is a priority region for the development of the Russian Federation and is recognized by the international community as an area with enormous growth potential. The richest reserves of minerals (oil, gas, precious metals), marine resources are concentrated in the macro-regions, huge territories have been preserved, untouched by the hand of man. Meanwhile, the region also faces a number of strategic challenges, including the formation of modern and efficient energy infrastructure.

The power sector in the Far East and the Arctic is characterized by a zone of decentralized power supply with more than a thousand distributed generation facilities. These facilities require timely modernization, and the active development of remote areas requires the construction of new power facilities using modern distributed generation and renewable energy technologies. This area has significant investment potential, the fulfilment of which will ensure the development of an entire industry of the high-tech business in the macro-region.

Already today, the Far East and the Arctic area is becoming a territory of active energy construction, with the world's leading companies showing interest in the region. It is expected that this territory will become the real and largest growth point for the next decades in Russia.

It is worth noting that the theme of the session has a global scale and is relevant not only for the Russian Federation, but also for many Nordic countries (USA, Canada, Denmark, Norway) and island states (Japan, Indonesia, Philippines, New Guinea), which have a significant share of local diesel and coal-fired generation, and the industry of distributed energy is of significant interest to international investors in the field of renewable energy sources, energy storage systems and energy-efficient technologies.

The profile session of the Far East and Arctic Development Corporation JSC, the Distributed Power Generation Association and Business Russia will be attended by the heads of the world's largest energy companies, representatives of financial and investment structures, and development institutions. The moderator of the session is Maksim Zagornov, Business Ambassador of Business Russia to the UAE, President of the Distributed Power Generation Association.

The industry session at EXPO 2020 is held in preparation for the 25th International Industry Forum World Energy Congress, which will be held in October 2022 in St. Petersburg. It is important to note that the inclusion of distributed generation in remote and isolated areas in the IEC-2022 program was initiated by JSС Far East and Arctic Development Corporation together with the Distributed Power Generation Association supported by the Russian National Committee of the WEC.